Watching a dog pass away naturally can be upsetting and can lead to many unanswered questions. A common one is, why do dogs want to be alone when they die?

Some dogs instinctively want to be alone when they are about to die. It has been hypothesized that this is because their body would attract predators and could be dangerous to the pack.

In this article, I’m going to share some of my experiences losing my dog. What happened and what I would do differently.

Many dog owners have described situations where their dog had wandered away to die. Sometimes wandering off and found by a neighbour. Or their dog huddled away in a corner of the house where they don’t normally go.

As humans, we like to be around our loved ones when they pass, and it can be very unsettling when we don’t get the chance to do that with our beloved dog whom we love so much.

Discovering their body can be both unsettling and traumatic.

My mother experienced this. She was sleeping like any other night when she heard a “thump” noise in the middle of the night. It startled her, but then the noise went away, so she went back to sleep.

The next morning when she woke up, she found that her dog had passed away in the middle of the floor of the living room floor.

And like many humans, was questioning why on earth wouldn’t her dog come to her if he wasn’t feeling well. She thought maybe there was a chance she could have somehow saved his life.

This traumatic experience still haunts my mother to this day.

However, not every dog exhibits the behaviour of wanting to be along when they pass away. Some dogs exhibits the complete opposite behaviour where they whine and cry if their owner leaves their side.

I personally experienced this when my dog Onyx passed away.

Onyx was always a bundle of joy and energy. But in the last week of her life, she had stopped eating and her energy levels dropped drastically. She had such low energy that she couldn’t even walk.

I was worried about her, even though she was 15 ½ at that point, I knew the end was near. But I wasn’t giving up on her. I called and booked a veterinarian appointment for the following morning at 8AM.

The night before our appointment, she started “yiping” anytime I would leave her side. I thought she was in pain, but as soon as I returned to her side, she would calm down.

All I would do is gently pet her fur to reassure her and comfort her.

I stayed with her all night. I unrolled a sleeping bad and slept next to her. I think it was very comforting for her to know that I was there in her final moments.

The next morning, she passed away naturally in her sleep.

It’s mystifying how some dogs want to be alone while others want you to be with them. There doesn’t seem to be any reasons why a dog would pick one over the other. It could be instinctual or it a personality trait. We will never truly know.

What To Do Immediately After

Whether your dog passes away on their own, or with you at their side, losing a pet is extremely difficult. It’s a different kind of pain that only those who have lost a pet can truly understand.

When I lost my dog, I cried.

I couldn’t stop thinking about what I could have done to prevent this from happening. Maybe I could have brought my dog to the veterinarian sooner?

After my dog Onyx passed away in her bed, I covered her in a blanket and called my veterinarian to arrange her body to be cremated.

One of the hardest thing I ever had to do as a dog owner, was to carry her body into the car, and into the veterinarian’s office. I am so lucky that a friend was able to come by that day and help me.

I feel sad talking about these things, but as a dog owner who has gone through them, I feel it’s important to share.

One of the things I was unaware of, was that when a dog passes away, their bodily fluids and gas will be released. If their bladder is full, then there will be a puddle of urine after they pass away.

This happened when my dog Onyx passed away. When I went to move her body, the bed she was sleeping in was full of urine. Had I known this would happen, I would have put a couple of towels underneath.

It’s also common for some feces to leak out. This usually only happens when the dog has had diarrhea.

Another thing that caught me by surprise was to see that my dog’s eyes stayed opened even after she had passed away.

This is because that’s the “natural” relaxed position for when a dog passes away. It’s the same thing for humans as well.

Dealing With The Loss

Losing a pet is extremely painful and difficult. To some people, it feels like it’s even harder than losing someone they know.

Our pets are like our children. We take care of them and look after them their entire lives. They’re a big part of our every day life, and losing them is extremely painful.

The hardest day will be the day your dog passes away. You will need some time to grieve. Take the day off work, and if you can, take the entire week off to help you deal with the loss.

Don’t commit to doing anything during this time. It’s important to give yourself time to grieve and allow yourself to process the loss of your dog.

Be mindful that everything in your home will remind you of your dog. Their sleeping area. Their toys. Their food bowl. Everything.

It may be a good idea of putting all of your dog’s belongings in a large box that is kept out of sight until you’re ready to deal with them emotionally.

It will take time for you to feel better. It may be a few days, a few weeks, or even an entire year.

There’s no “right” or “wrong”, your grief will last as long as it needs to last. The important thing is to feel the loss and to not keep it all bottled up inside.

Once your dog passes away, it can be hard to cope with life without them. This is especially true if your dog was a very big part of your life, like bringing them to work or playing with them every night.

When my dogs passed away, my wife whom knew my dogs but didn’t raise them as puppies, knew that I was dealing with grief and wanted to do something special for me.

She is very crafty and made a beautiful frame that included photos of my dogs and their collars. I really love it, as it kind of keeps their memories alive and like they’re still around.

But it doesn’t have to be a frame. It can be anything you want, a scape book, a memory wall or even a photo album.

As long as it makes you feel better, that’s all that matters.

A few months after my dogs passed away, I wanted to bury their ashes in my backyard. However, I also wanted some sort of sign or memorial that would say my dogs were buried there.

When I couldn’t find anything of high quality, I ended up making my own pet memorial.

This really helped me get closure with the loss of my dogs. The memorial serves as a way to remember them, and seeing their faces on the stone makes me smile, it’s kind of like they’re still around.

Hi, I’m Jean - Pet Memorial Specialist here at Furever Memorials. I wrote this article to help my fellow pet lovers who may be having a difficult time with the recent loss of their pet.
Want me to craft abeautifulmemorial in your pet's honour? YES, LET'S GET STARTED!

Furever Memorials is a Canadian pet memorial engraving company. Our blog is dedicated to supporting pet lovers who may be having a difficult time with the recent loss of their pet.

Take a look at some of our recently engraved pet memorials. 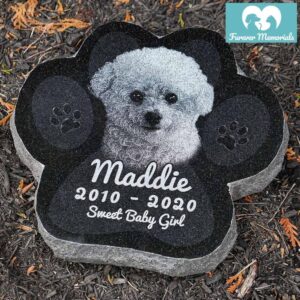 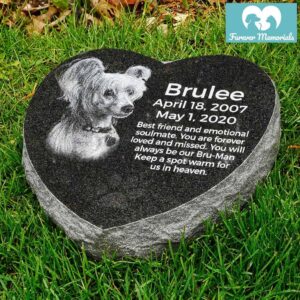 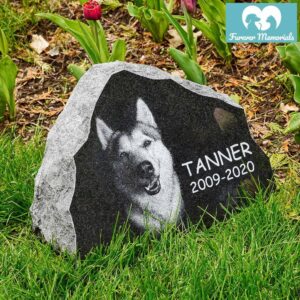 Please log in again. The login page will open in a new tab. After logging in you can close it and return to this page.

Join Waitlist We will inform you when the product arrives in stock. Please leave your valid email address below.